There’s a spat between Richard Tol and Bob Ward I haven’t paid any attention to. It seemed boring until I saw a tweet today from Tol which claimed Ward admitted to lying. I rarely hear anyone make such an admission. Naturally, I was curious.

It turned out Tol’s claim was misleading. Ward hadn’t admitted to lying. He said some things, and Tol interpreted them, in their totality, as Ward admitting to lying. Whatever. It was boring, but it wasn’t a complete loss. I discovered an interesting abuse of the IPCC process which Tol defends. It’s not surprising he defends it given he’s apparently the one responsible for it.

This is what Tol quoted Ward as saying about the IPCC and Tol’s response:

“A section had been inserted on ‘Aggregate impacts’”
In fact, that section was moved from Chapter 19 to Chapter 10. As far as I am aware, Mr Ward did not raise this concern with the IPCC. He was informed no later than 2 April 2014 that the text was moved rather than added.

This is fuller context of what Ward said:

I was stunned when I looked at Chapter 10 on ‘Key Economic Sectors and Services’ on which Professor Tol was one of the Coordinating Lead Authors. A section had been inserted on ‘Aggregate impacts’ which was based almost entirely on Professor Tol’s 2013 paper. The Chapter also included a new table and graph which were based on Figure 1 and Table 1 from his 2013 paper.

None of this material had been included in the Second Order Draft of the report (a copy of which was also leaked to a blog for climate change ‘sceptics’ that had been made available to reviewers, including me.

Tol’s response implies the section Ward took issue with had been moved but otherwise left relatively unchanged. This could not be further from the truth. I’ll demonstrate. The text for the section Ward complains about (10.9.2, Final Version) was:

Since AR4, four new estimates of the global aggregate impact on human welfare of moderate climate change were published (Bosello et al., 2012; Maddison and Rehdanz, 2011; Roson and van der Mensbrugghe, 2012), including two estimates for warming greater than 3°C. Estimates agree on the size of the impact (small relative to economic growth) but disagree on the sign (Figure 10-1). Climate change may be beneficial for moderate climate change but turn negative for greater warming. Impacts worsen for larger warming, and estimates diverge. The new estimates have slightly widened the uncertainty about the economic impacts of climate.

Welfare impacts have been estimated with different methods, ranging from expert elicitation to econometric studies and simulation models. Different studies include different aspects of the impacts of climate change, but no estimate is complete; most experts speculate that excluded impacts are on balance negative (Füssel, 2010; Tol, 2008; Yohe, 2008). Estimates across the studies reflect different assumptions about intersectoral, interregional and intertemporal interactions, about adaptation, and about the monetary values of impacts. Aggregate estimates of costs mask significant differences in impacts across sectors, regions, countries and populations. Relative to their income, economic impacts are higher for poorer people. 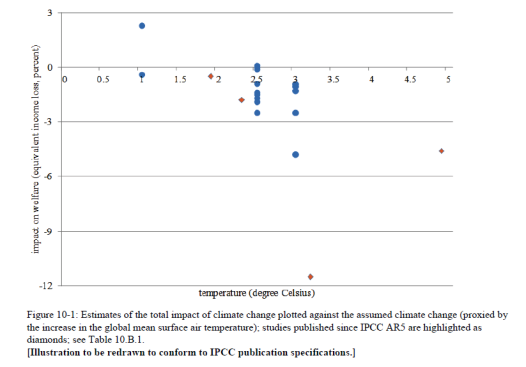 Strangely, despite being entirely about aggregate impacts, this section fails to state what they are. It fails to say anything about what previous IPCC reports concluded on the subject. It fails to explain what has changed or why. It fails to make any effort to quantify uncertainty. It merely describes the conclusions of a handful of papers published in the last few years. In totality, it is two paragraphs spanning half a page with only six references and one figure.

The Second Order Draft of this report did not have a section titled “Aggregate Impacts” in Chapter 10. Richard Tol claims a section from another chapter (19) was merely moved to Chapter 10. The section which was supposedly moved was 19.6.3.5 (available here). The first paragraph of this section is:

The RFC pertaining to aggregate impacts includes risks to society or ecosystems that are aggregated globally into a single metric, such as monetary damages, lives affected, or lives lost, although most aggregations in the literature are carried out in monetary terms. Estimates of the aggregate, economy-wide risks of climate change since AR4 continue to exhibit a low level of agreement. Studies at the sectoral level have been refined with new data and models, and have assessed new sectors.

Already, it is obvious the two sections are different. This paragraph explains what aggregate impacts are and refers to the conclusions of the previous IPCC report regarding them. The differences become more pronounced two paragraphs later when a discussion of species extinctions begins:

However, it is possible part of the section was moved while other parts were discarded (or moved elsewhere). To examine this possibility, we can scroll past a page of text on environmental effects to reach the first discussion of anything covered by the section Ward complained about. At that point, it says:

Assessments of economy-wide consequences of climate change report results either as total damages or as marginal damages, the latter represented by the social cost of carbon (SCC). Estimates of global aggregate impacts from integrated assessment models (Figure 19-7) exhibit a low level of agreement (Ackerman et al., 2011; Anthoff and Tol, 2010b; Bosello et al., 2012; Hope, 2013a, 2013b; Nordhaus, 2008, 2010; Roson and Mensbrugghe, 2012; Waldhoff et al., 2013). Sectoral breakdowns also exhibit a low level of agreement (Figure 19-8) (Anthoff and Tol, 2010b; Anthoff et al., 2013; Nordhaus 2007, 2008; Roson and Mensbrugghe, 2012). There is very high confidence that aggregate estimates of costs mask significant differences in impacts across sectors, regions, countries and populations. For this reason, as well as the existence of only a few studies with sectoral detail that employ alternative development pathways, it is difficult to detect a monotonic relationship between vulnerability and aggregate risks at the global scale. In some locations and amongst some groups of people with high exposure and high vulnerability, net costs per capita will be significantly larger than the global average (Anthoff et al., 2009; Nordhaus, 2011; Warren, 2011).

While citing nearly a dozen references. This says there is a low level of agreement on global aggregates. The section Ward complained about says:

While citing only three references. This section states new estimates “agree on the size of” global impacts, a claim not found in the original. It also removes any comment regarding a “low level of agreement.” Finally, it adds the entirely new claim that global warming “may be beneficial for moderate climate change.”

The Second Order Draft discussed uncertainties at length, including multiple paragraphs I haven’t quoted. It goes so far in discussing uncertainties as to say:

Additionally, as Bob Ward pointed out, the only figure from the Final Version section (Figure 10-1, shown above), was entirely new. Also, as Ward says, it is derived from Richard Tol’s work. We can even see it discussed on Tol’s blog. It is nothing like the two figures included in the original section: 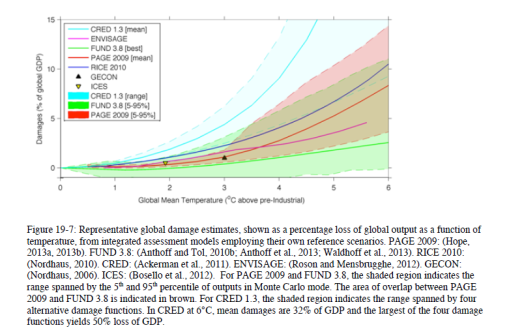 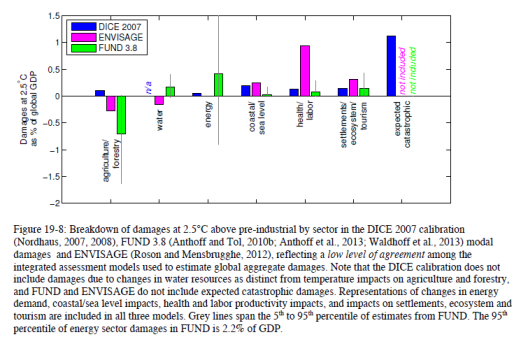 Bob Ward was right to be stunned. There was no reason such significant changes should have been made between the Second Order Draft and the Final Version. Not only did they change the focus of the section to promote the work of a Contributing Lead Author of the chapter (Richard Tol), they removed a great deal of information from the report.

Richard Tol’s defense on this point is to say “that section was moved from Chapter 19 to Chapter 10.” This claim is true only in the sense the title of the section was moved from one chapter to another. Practically nothing else was. Tol is aware of this not only because he was a Contributing Lead Author of the new section, but he was also strongly opposed to the original version, submitting a comment which said:

The opening paragraphs of 19.6.3.5 are not about aggregate impacts at all. These are followed by paragraphs stating that you really should not trust these studies. This is most odd. You do not write in the same way about other literatures, even if those papers can be picked apart just as easily or even more so. It is your job to assess the literature, rather than attack it. (Tol, Richard S.J., Vrije Universiteit Amsterdam)

In other words, Richard Tol is fully aware Bob Ward’s reaction to the inclusion of this section in the IPCC report was correct. Everyone should be stunned. By all appearances, this was nothing but a blatant abuse of power by Richard Tol to remove material he disliked while promoting his own work.